I offer online and in-person presentations. I am available to speak at libraries, schools, bookstores, etc., anywhere in the Greater Toronto Area (GTA).

My presentations are all roughly one hour in length (though they can be longer, upon request) and include time for audience questions.

Here are my main presentations:

My book, The Beatle Bandit (published 2021 by Dundurn Press) tells the story of Matthew Kerry Smith, an intelligent but troubled young man who robbed banks in the Toronto area during the early 1960s to finance a revolution.

On July 24, 1964, Smith disguised himself in a Halloween mask and a “Beatles” wig and held up a branch of the Canadian Imperial Bank of Commerce in North York, Ontario. Smith killed a bank patron who intervened in the robbery and escaped with over $25,000. The “Beatle Bandit” case fueled a nationwide debate about gun control, insanity pleas, and the death penalty.

My talk examines Smith’s life, his multiple bank robberies, and the bizarre aftermath of his murderous 1964 CIBC heist.

“In November 2021 Nate Hendley gave his third presentation to our Kitchener-Waterloo Probus Club. This talk, conducted on Zoom, was about his latest book The Beatle Bandit.

Once again Nate presented a very well-researched and interesting true-crime tale. He has a compelling and captivating presentation style, and our members thoroughly enjoyed his talk. Nate has the ability to transport you to the ‘scene of the crime’ and make you feel like you are personally experiencing all of the details and unique aspects of the crime.

In addition, each of Nate’s presentations has had a lesson that is relative to the current issues of the day such as gun control, mental health, and the rights of suspects while being interrogated among others.

We look forward to inviting Nate back to our club for another presentation when he is available.”—Kerry Long, Chair of the Program Committee, Probus Club of Kitchener-Waterloo, Ontario

The Art of the Con

My book, The Big Con (published in 2016 by ABC-CLIO) looks at scam artists such as Bernie Madoff and Charles Ponzi (from whom we get the term “Ponzi scheme”), online romance fraud, the Nigerian Prince email, disaster fraud, pyramid schemes, medical fakery and other forms of deceit.

This talk includes commentary about how to avoid being scammed and why old cons continue to flourish under new guises.

“Nate Hendley recently gave a talk about cons and scams at our Probus club. I found that the presentation was very well researched and documented. Nate’s style of delivery is very engaging and informative. Our members really enjoyed the presentation; it was one of the best of the year. It’s obvious that Nate is very well qualified in his area of expertise.”—Kerry Long, Probus Club of Kitchener Waterloo, Ontario

The following interview, recorded September 2016 with Talk Radio Europe will give you a sense of what my presentation about “The Art of the Con” is like:

The Boy on the Bicycle: A Forgotten Case of Wrongful Conviction in Toronto 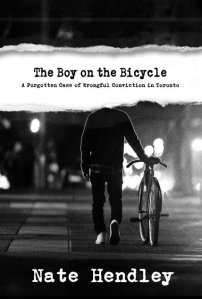 The Boy on the Bicycle: A Forgotten Case of Wrongful Conviction in Toronto tells the story of Ron Moffatt, who was 14-years old in 1956 when he was falsely accused of murder. This little-known Toronto tragedy involves a coerced confession, a fumbled police investigation and a crusading lawyer who sought to free Ron from custody.

“Nate Hendley spoke [October 19/2018] at the LIFE Institute at Ryerson University. He was invited to discuss his recent book, The Boy on the Bicycle. Nate spoke passionately as he knows the individual who was wrongfully convicted. He was, therefore, able to give a personal perspective on the case from those involved in addition to the well-researched written material in the book. His lecture generated many intelligent questions about induced confessions and the wrongfully convicted. Nate would be a welcome lecturer in the future at the LIFE Institute.”—Sandy Kingston, LIFE Institute, Course Coordinator

The following interview, recorded in August 2018 for the Stuph File Program podcast will give you a sense of what my presentation about The Boy on the Bicycle is like:

Capone and Schultz: A Swaggering Crime Boss and a Mobster Misfit 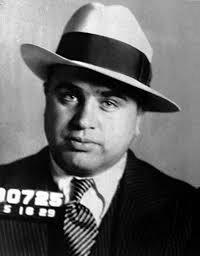 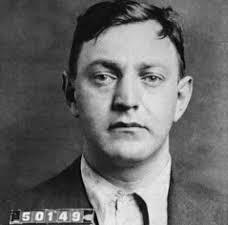 Capone was a major mob boss in Chicago while Schultz was a force to be reckoned with in New York City.

While sharing certain similarities (both men rose to power in part through bootlegging—selling illegal alcohol during Prohibition—and were beset with tax problems), the personalities and eventual outcomes of these two crime figures were drastically different.

This presentation is based on my books about Dutch Schultz and Al Capone.

“Nate recently gave a talk at the High Park Library for our ‘True Crimes’ series, entitled ‘Dangerous and Deadly: Mob Boss Al Capone and Dutch Schultz’ about two famous criminals whose biographies he had penned. A good author knows what his characters are carrying in their pockets and what kind of bullets his characters use in their guns. Nate helped us understand where these men came from, what their motivations were, and what caused their downfalls. We came to know, understand, and perhaps admire these very quirky characters. It was thrilling and scary and perfect for Halloween.”—Meghan Edmonds, Sunnyside Historical Society

I charge reasonable rates and require minimal equipment. For more information, email me at nhendley@sympatico.ca